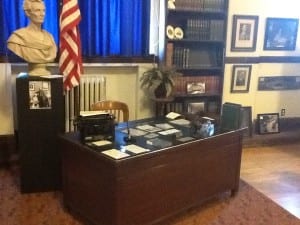 In 1928, Senator Irving Lenroot invited President Coolidge to Cedar Island for a summer of cooler weather and good fishing on the Brule River.  His presidential office that summer resided in Central High school’s library.  When the Superior school district closed down and demolished Central, it saved the room’s contents and donated them to DCHS for an exhibit.

Using photographs taken of the room in 1928, DCHS has recreated part of the Coolidge Room including his desk,which was filled with cement to prevent fire and theft.  Other items from the Coolidge Room are a forty-eight star U.S. flag and several photos of Coolidge as he posed for pictures with everyone, including children, dogs and even a cow.  This summer the Coolidge Room will be expanded to recognize a time when a president could be so accessible to people in a small hamlet in northern Wisconsin.

Medical exhibit on Dr. L.A.Potter, his instruments and times!!!!

The Dug out Canoe Mystery