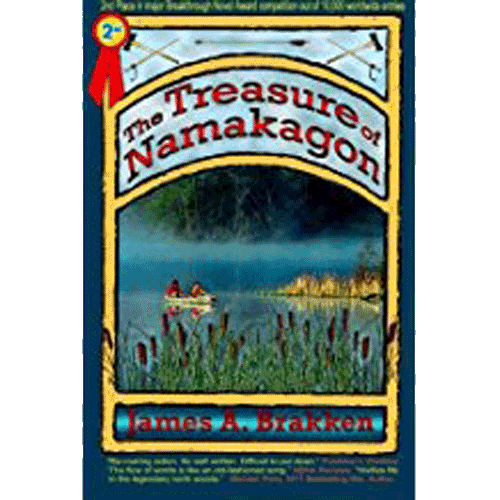 The Treasure of Namakagon – by James A. Brakken – A young lumberjack, his Indian mentor, and a lost silver mine—a fact-based tale of timber, treasure, and treachery in America’s 19th century wilderness. Following a daring rescue from a dangerous child-labor scheme in 1883 Chicago, an orphan is plunged into the peak of lumberjack life in far northwestern Wisconsin. There, an Ojibwe chief teaches him respect for nature and shows him to hidden treasure—an actual mine lost when the chief died in 1886 and yet to be rediscovered.

You’ll meet young Tor Loken whose family owns a wilderness lumber company. You’ll join the fight when a sinister timber tycoon takes control of the river, threatening the camp’s future and the lumberjacks’ dollar-a-day pay. You’ll be in the cook shanty before dawn for breakfast, then out into the cuttings where, knee deep in snow, you’ll help harvest giant pine logs. Hitch the Clydesdales to the tanker. Ice the trails for the giant timber sleighs. Take the train to town but keep one eye peeled for hooligans seeking an easy swindle.

Back in the bunkhouse, spin a yarn with colorful lumberjack friends. Next, it’s a Saturday night of merriment in town. Dress warmly, though. It’s a four hour sleigh ride back to camp at twenty below zero. Come spring, you’ll drive the timber down a thundering, icy river, jumping log to log as they rush downstream, danger around each bend. Finally, payday! Time to celebrate. Keep your pocketbook buttoned up, though. Scoundrels are eager to separate you from your winter wages. Put on your red wool mackinaw. Grab your pike pole.

You are about to plunge into 19th century lumberjack life and THE TREASURE OF NAMAKAGON, a thrilling adventure, thick with twists and turns, researched and illustrated by an author who lives there. And, yes, the boy wins the girl’s heart.  $16.87