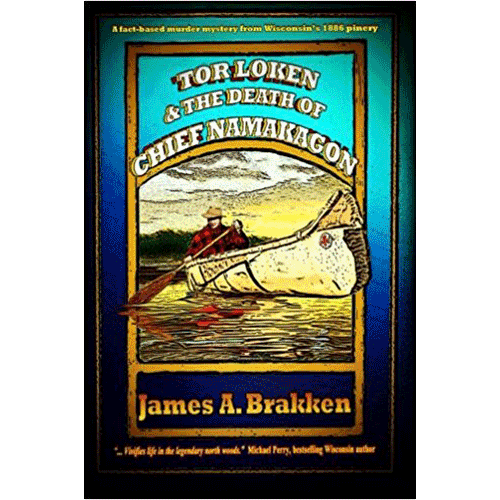 Tor Loken & The Death of Chief Namakagon – by James A. Brakken – Button your mackinaw and lace up your boots. You are about to plunge into a fact-based tale of timber, treasure, and treachery in America’s 19th century wilderness—a twisting, turning, thrilling north woods mystery based on the suspicious 1886 death of Chief Namakagon. Step into the 1880s, an era of lumber camps, lumberjacks, and lawless wilderness boom towns. Join Tor and Rosie as, with you, they solve the dark mystery surrounding Chief Namakagon’s murder.

It’s a fast-paced, fact-based thriller by the award-winning Wisconsin author whose research now unlocks the truth. Book 2 in the Namakagon trilogy, this illustrated, 243-page historical fiction is written for adults although suitable for age twelve and up. It is a thrilling, mystery-adventure you won’t want to put down. This illustrated fast-paced and fact-based historical murder mystery is BOOK II in the AMAZON BREAKTHROUGH NOVEL AWARD-recognized “Chief Namakagon trilogy.”

It’s a stand-alone adventure novel for readers of all ages and a wonderful blend of fact and fiction guaranteed to bring life to the 13-decade-old legend and unsolved mystery. The story begins with a silver mine lost in 1886 in northern Wisconsin and the mysterious death of its owner, Chief Namakagon. (Fact!) In an exciting look at life through the eyes of lumberjack, Tor Loken, we learn more and more facts surrounding this yet unsolved murder. Following a perilous November 1886 blizzard, the Ojibwe elder is found dead near his secret silver mine. (Fact!) Only nineteen-year-old Tor Loken can prove murder. Suspicious accidents soon plague the lumber camp. New faces appear. New tales are told. (All based on fact!) Tor and his sweetheart, Rosie, risk their lives to protect the tribal silver and solve the mystery. Book I in the series made the 2013 ABNA competition’s semi-finals. In effect, IT TIED FOR SECOND PLACE OUT OF 10,000 NOVELS ENTERED WORLDWIDE!.

Step back into the 19th century as award-winning author and conservationist, James Brakken takes you to the silver fields, the lumber camps, and the bustling boom towns from Lake Superior to Chippewa Falls. Follow the clues, see the maps, and draw your own conclusions about Namakagon’s murder and the cover-up that followed. Although this is a stand-alone tale, you will soon wish to know what preceded and what will follow. James Brakken’s THE TREASURE OF NAMAKAGON, launched in June, 2012, and his upcoming novel, TOR LOKEN and the THE SECRET OF NAMAKAGON will soon be on your wish list. Join Tor Loken and the rest of the lumberjacks as they endure many life-threatening adventures–all based on true events.

Be in the runaway lumber train with Tor; Survive a deadly, raging forest fire; Share the wheelhouse of the Great Lakes Schooner, LUCERNE, as she struggles against a severe November gale; See how river pirates stole millions of dollars worth of timber in the spring log drives; Be with Tor and his friend Junior when they become lost in a vast wilderness. You will even learn how unscrupulous “agents” swindled thousands of lumberjacks using bogus hospital insurance script. These tales and more are based on fact and all cleverly woven together to create this thrilling murder mystery. TOR LOKEN and THE DEATH OF CHIEF NAMAKAGON will soon have you yearning to search for both the old chief’s lost silver AND the truth behind his 1886 demise.

Book II offers 232 pages, many illustrations, maps to Wisconsin’s historic silver fields, and an extensive glossary of Ojibwe & lumberjack terms. A great MADE IN USA gift idea. From Brakken’s writing came these comments: PUBLISHERS WEEKLY: “So well-written.” “Difficult to put down; a great read.” AMAZON BOOKS says: “The writing style of this piece is its greatest strength.” “The flow of the words is like an old fashioned song.” MICHAEL PERRY, NYT bestselling Wisconsin author: “Vivifies the tumultuous nature of 19th-century life in the legendary north woods.”  $18.98